Supported by gains in the U.S. construction and housing markets and robust overall economic growth, U.S. ceramic tile consumption increased for the first time since 2018.

Spain, which in 2020 supplanted China as the largest exporter of ceramic tile to the U.S. by volume, maintained this position. Spanish imports held a 22.2% share of total U.S. imports by volume in 2021, up from 20.7% the previous year.

Italy was the second largest exporter to the U.S. by volume, its highest position since 2008. Italian-produced tiles made up 17.4% of the U.S. import market last year, up from 16.6% the previous year.

Mexico, which was the third largest exporter to the U.S., has seen its share of total imports fall steadily over the last decade from an all-time high of 31.5% in 2012 to 16.1% last year. 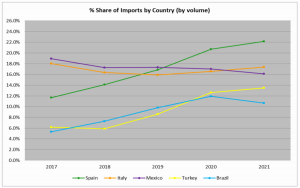 The five countries from which the most tiles were imported in 2021 based on volume were:

The average values of tile[3] (including CIF + duty) from the five countries that exported the most tiles to the U.S. in 2021 based on volume were:

In the residential market, despite supply chain and labor issues, new home starts rose for the twelfth consecutive year and were at their highest point since 2006. The 1.60 million units started in 2021 represented a 16.0% increase from the previous year.[6] 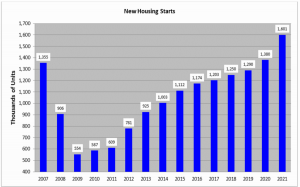 With record-high average new home prices and a low supply of available properties, new single-family home sales fell for the first time in a decade. The 770,000 units sold in 2021 represented a 6.3% decline from the previous year.[7] 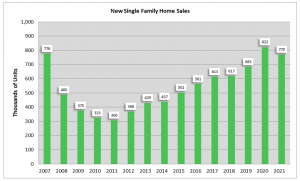