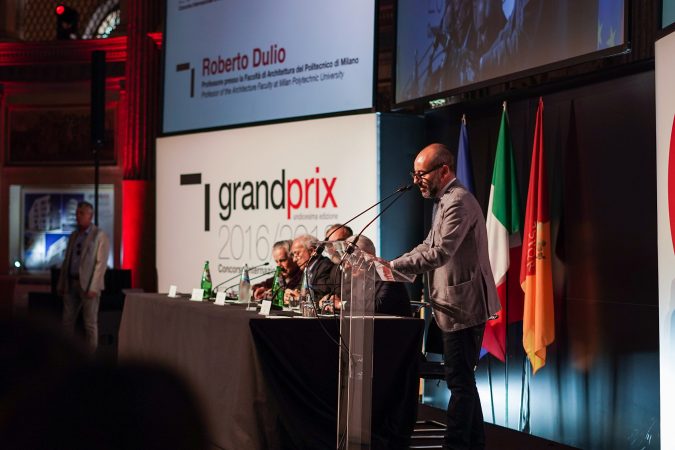 Twelve editions. Nearly 30 years of history. More than 1800 projects entered by 1300 designers from all over the world. The Grand Prix is a competition designed to identify the most significant works in the architectural world that skillfully combine technical properties with creative application, making the company’s porcelain stoneware tiles an essential element of their design. It’s about showcasing projects where these products are a vital part of the design process and not simply a covering material that could be replaced by another. 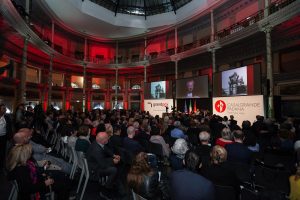 The competition focuses on a selection of actual buildings rather than design ideas. As a result, it serves as a tangible comparison of ideas that have been followed through, taking into account a wide range of types of architecture.

The quality of the works entered for the various editions of the Casalgrande Padana Grand Prix has always been reflected by the prestige of the locations chosen for the award ceremonies that crown the winners in the four competition categories:
– Headquarters and shopping malls,
large surfaces
– Public, service and industrial construction
– Residential buildings
– Façade cladding and outside flooring, with the addition of the complementary Swimming Pool section
The award ceremony took place on 27 May at MUDEC, the Museum of Cultures in Milan. 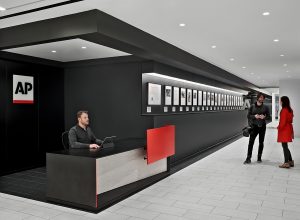 The black and white tones used for the ceramic coverings of the interiors highlight spaces and pathways that make up a linear, attentive, carefully calibrated design philosophy that engages closely with the architecture of the building occupied by the workspace. The contrast struck by the black and white tells the story of the settings, shaping a direct interaction with the colours of the newsprint and illustrating the daily efforts of the journalists whose job it is to transmit information. 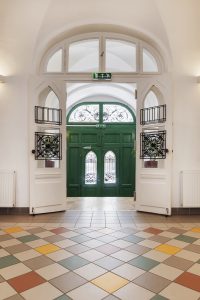 Part of a project for the renovation of a historical building, the new flooring, composed of pastel-coloured tiles, emerges from the white and neutral background of the interiors to take on a key role. The new take on the laying design dictated by the attention paid to the original pattern teams with the contemporary approach to slot seamlessly and attractively into a construction from the past. The coloured flooring indicates the various pathways, acting as a design element that teaches the school’s young pupils to appreciate beauty. 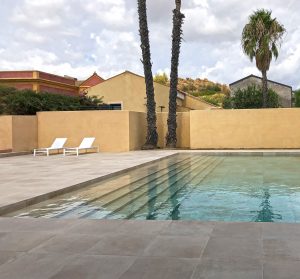 The use of an earthy shade for the ceramic coverings extends from the paving of the courtyard to the inside of the swimming pool, establishing a single material shade for different levels. A new interpretation of the lessons taught by the landscape architect Luis Barragan defines the ochre shade of the perimeter walls that form a closed architectural space reminiscent of the courtyards of buildings in Catania.
The outline of the walls enhances the view of the tops of the surrounding trees, which partly shield the courtyard and the pool from the buildings around it.

The first step in a major project for the redevelopment of the Corviale housing complex by Mario Fiorentino: a controversial, kilometre-long social architecture development that is part
of the history of post-WWII European architecture.
The current situation of the Corviale development – the re-use and re-invention of an imposing urban construction – adopts the dark flooring of the suspended road, now turned into a beam of green, as the departure point for a project that will be developed over time. 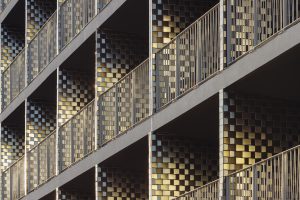 The “Right to Matter” is expressed in a number of projects forming part of an on-going process of research that yields different results every time, forcefully underscoring the concept of ennobling elements of architecture, spaces and routes from a tactile, visual and symbolic perspective, using ceramic coverings. This research evolves to shape “mutant”, emotional architectures whose appearance changes along with the light at different times of day and in which ceramic material has a key role to play.